So-called successful people — for this blog entry it means entrepreneurs who have made hundreds of millions of dollars and maintained a balanced life — have daily habits which most regular folks do not. They spend their time more efficiently. That’s why they achieve more. It’s not because they are super smart or ‘gifted;’ their daily routines are more disciplined, more inspired, focused and more aggressive in pursuit of goals than yours…

For those of you who find that depressing, snap out of it. It’s intended to motivate! The fact there are entrepreneurs making hundreds of millions of dollars a year who have joy-filled personal lives dedicated to family, friends, and philanthropy, and yet they aren’t ‘gifted’ or unique, should make you realize how attainable it is. Anyone can do it, but few are willing to commit because it requires tremendous sacrifice in the beginning and a lifestyle change. However, after a little while of committing to the disciplined lifestyle of the ultra-successful, you’ll begin to love it. Discipline and responsibility are key to self-worth and happiness, never mind financial freedom.

There is a famous expression which I often cite:

I’ve been fortunate to get to know, on a personal level, several entrepreneurs who fit the bill above. From a billionaire who made his fortune in the resource industry, to one of Canada’s most successful fund managers, to an elite tech entrepreneur in Silicon Valley and others, I’ve learned what makes them tick and how committed they are to their daily rituals. I’ve hung out with them away from work, whether it be with their families for dinner, or on a trip overseas or out on the town for a night of drinks and music; and while they all have unique personalities, there are common denominators in their daily routines.

I find it fascinating how simple changes in daily routines can make all the difference in whether someone makes it to the top of their industry or fades into mediocrity. It’s the many little daily choices that define people…

With that in mind, there are seven daily routines all of the ultra-successful entrepreneurs I know share. Their daily routines are what made them who they are: balanced, wealthy, inspired and happy.

Read like it’s a religion: One of the most successful private fund managers in Canadian history, John Dobson (he passed away in 2013 – read more here), read three to four books at a time. When spending Christmas with him (he was my wife’s uncle), he’d bring a stack of books to their cabin in the Laurentian Mountains. Every day while there, he’d ‘retire’ to his room for three hours to read under a lamp. I remember looking at the diverse book collection he had on his nightstand at the cabin. One book was about the history of Christianity (he wasn’t a religious man), the other a Tom Clancy novel, one on politics and the last was about the economic state of Latin America. He put tremendous importance on reading and was the reason I now read more than one book at a time (fiction at night and non-fiction in the morning).

The resource development billionaire mentioned earlier, who I flew overseas with on his private jet, is a similar individual. Aside from the two hours he napped while flying overseas, he was reading a thick book on the history of the Saudi Kingdom. He has no business in the Kingdom, nor in the oil and gas sector, but he is an intelligent guy who loves to learn…

When you talk to him and ask questions, he gives you a thoughtful response, often pausing for several seconds before speaking. And his recollection of historical events is most impressive.

Bottom line: people who read daily are more interesting and have context on business, life, and history. And they have better vocabularies! All important for success.

Question and improve their use of time: The more time you have, the more money, memories and loving relationships you make. Highly successful entrepreneurs know this; and they constantly strive to find ways to improve upon their use of time by relieving themselves from the monotonous day to day tasks so they can pursue the big goals. They know time is the most valuable currency in this world and attempt to leverage their hours in the day. Efficiency is everything to them. 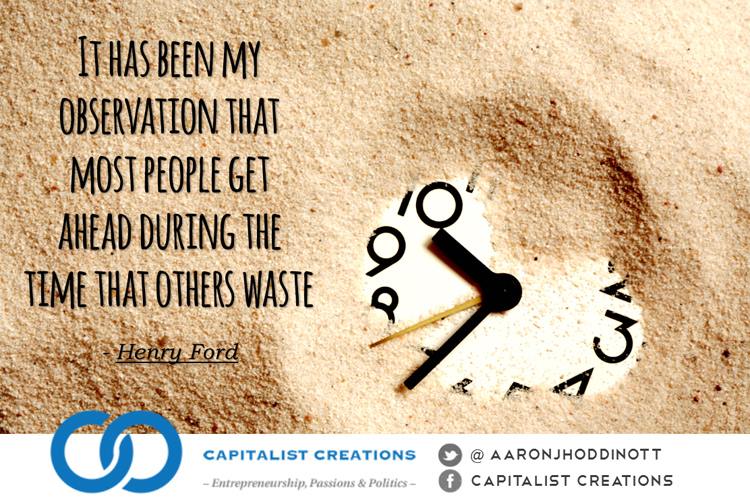 Wake up early or stay up late: The elites either get their ‘creative’ (otherwise known as inspired) work done in the early-AM by jumping out of bed long before the sun rises, or when everyone goes to sleep. This typically depends on their lifestyle and family life. If they have a family, they’re often early risers.

Surround themselves with intelligence: They hire individuals with strong opinions, often contradicting their own. Their staff members are intelligent, well-read people who are self-starters and results driven. The most successful entrepreneurs I know love to surround themselves with this type of person because it provides them the opportunity to have their assumptions challenged. And intelligent people aren’t ‘yes men.’

Measure purchases or investment with an ROI model: I knew a nuclear physicist turned highly successful entrepreneur. He was a frugal man with an incredible business mind. He had a unique way of measuring his personal use of money too. For example, he decided to splurge and buy a mansion, which was unlike him, on a ten-acre parcel of land. When he bought it, he was somewhat sheepish about talking about it. Nevertheless, he invited me over for a weekend getaway that included fishing, beer and watching the NBA finals in his new pad.

The topic of his new house came up. It was a palace, with tasteful finishings and, surprisingly given that it was nearly 10,000 square feet, a very cozy feel. Being a man who came from little growing up, he inherently (as most of us do) felt the need to justify to me his rather grand purchase. He was, after all, a bachelor of sorts and didn’t ‘need’ all that space.

He explained how after buying the house at the bottom of the market his carrying costs made economic sense from an investment standpoint. Surely he could have paid cash for the house, but it all made financial sense for him only to put 40% down, he explained. These are the details he shared with me. Unusual, but that’s the mindset. That’s the type of relationship ultra-successful entrepreneurs have with money.

Whether it’s business or pleasure, highly successful entrepreneurs make significant investments or purchases based on an ROI model. That ROI can include an emotional return too. It’s not just monetary. It’s a very similar story with the resource billionaire and his massive private jet. It made sense to him from an ROI perspective because it saved him more than two days a month in travel time, which meant more time spent with his kids.

Ignore social media: All highly successful entrepreneurs I know don’t have personal social media accounts. Perusing social media just doesn’t happen. They have better things to do with their time.

Think about the time you spend on social media. Now imagine how much better off you would be if you were reading a book instead.

Social media is an inefficient use of time (as per point number two).

Enjoy a hobby: Every successful entrepreneur I know has a hobby in which they make time for, on almost a daily basis. Whether it’s a pick-up hockey league they participate in, or training racehorses, growing charities or rehabilitating rescue dogs (these are real examples by the way), ultra-successful entrepreneurs, just like with their careers, commit all they can to their hobbies and causes. They know the importance of a balanced life.

Those little decisions we all make every day – the ones that determine how we spend our time, are huge. Choosing to read a book instead of watching that sitcom on Netflix: win. Deciding to hire people who will challenge you on a daily basis instead of ‘yes men’ or mere task managers: win. Waking up instead of hitting the snooze button: win.

It’s the daily routine of highly successful entrepreneurs that separates them from the average. Your daily routine will likely be the determining factor of whether you end up living a rewarding and balanced life as an entrepreneur; or if you barely keep your head above water while continually trying to ‘catch up’ to the pack. Consider what the elites have done to separate themselves, and perhaps add some (ideally all) of these seven habits to your day. Then watch the results in your business and relationships improve.

P.S. Subscribe to my newsletter below if you’re serious about becoming a better entrepreneur – that means both at and away from work. Only my best content will land in your inbox.