[dropcap style=”style1, style2, style3, or style4″]M[/dropcap]arc Thiessen, President George W. Bush’s lead speech writer for his 2007 State of the Union address, said that he liked Obama’s SOTU speech in some ways. Thiessen claims that parts of Obama’s speech were “eerily familiar” to what he wrote for Bush in 2007.

In respect to energy, healthcare and the economy, Thiessen said Obama’s comments were “awfully familiar” to what he wrote in Bush’s ’07 SOTU.

Imagine that… Barack Obama’s speech taking themes and ideas from George W. Bush’s. For the last five years we have listened to Obama blame Bush for countless problems in America; and now, in some twisted turn of events, he is using W’s ideas to address the country? No, this can’t be true.

I’m going to come to Obama’s defense here. I am certain that he had no intention of copying Bush, in any way, shape or form. Heck, I’m not even sure Obama read the speech before he stepped up on the podium to address the commoners. After all, the only major piece of tangible information he delivered was the announcement of this new “myRA” savings plan to be ran by the government. And he struggled to pronounce it properly. It appeared as if he was reading about it for the first time last night. You be the judge:

So there you have it. Don’t blame Obama for the similarities to Bush’s 2007 SOTU address. Before last night he may have never even read his own speech. If anything, blame Obama’s speech writer, who clearly isn’t a good one given the fact that: 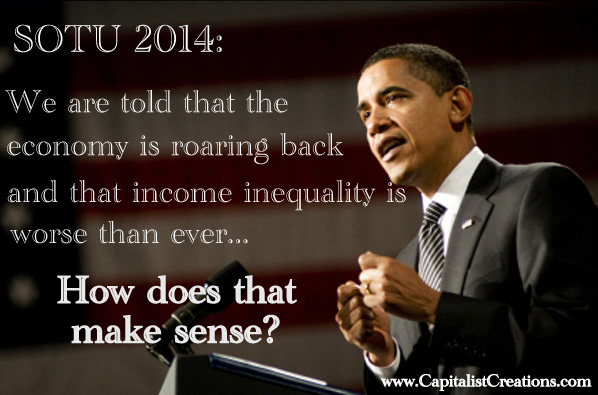 Politicians Use People as Props at State of the Union