Back to insights
You’re paying too much, for everything… here’s why:

Debt – The Root of Economic Failure

Debt is a contentious issue. Proponents are vociferous to its superficial benefits and claim it is integral to the functioning of modern civilizations, while opponents see debt as a philosophical problem that is in poor taste or bad character. 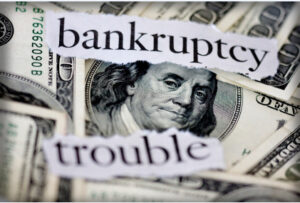 What many do not consider is that debt hinders economic growth, by uneven distribution of purchasing power between the bankable and unbankable portions of society; then, once the bankable have exhausted their borrowing capacity, we find that a large percentage of their earned income goes towards interest payment and principal repayment, thereby siphoning middle-class purchasing power. With the bankable now at their credit limit and their disposable income going towards loan servicing, aggregate demand shifts lower. The increased capacity industries tooled up for has now evaporated, and there is excess capacity, resulting in falling prices (not necessarily a bad thing) and eventual layoffs that contribute to even further reduced demand. This is the broad spectrum failure of modern economics.

The Failure of Modern Economics

The one problem modern economics has not solved, and in fact seems to perpetually exacerbate, is that there always needs to be a certain level of growth to sustain the economy, otherwise things tend to tank. Because of this, our entire economy resembles a Ponzi scheme where more people need to buy into it as time advances, otherwise the system crashes. The reason we need growth to sustain the economy is because of the debt that is part of the system. If growth stops, debts aren’t paid, people are laid-off, corporations go bankrupt and so forth. It’s tragic.

So, what we are left with is an economy that cannot move without leverage.

The Problem of Living in an Economy that Relies on Debt

The first issue is that prices of goods and services are warped from the inaccurate demand. A perfect example of this is the cost of tuition for universities in the US. Student loans have driven the price of education to levels that make no sense at all. $100k for a B.A. is highway robbery, and it’s happening all over the country thanks to government student loan programs. The second is that contraction of the debt market results in a slow-down of the economy, which directly reduces income levels, which then reduces the aggregate demand.

The moment debt enters the picture, it creates false demand and an economy that is designed to be dependent on it, in order to survive. It’s an economic drug. With a greater portion of the contribution in aggregate spending provided by debt facilities, it adds an inflationary pressure to the system, and moves prices out of range for an increasingly marginalized society. Once the bulk of a person’s income goes towards servicing loans and paying down principal, he has little material left to contribute to an economy. Eventually someone else takes his place with debt-funded spending and the habit perpetuates, because for every dollar that is paid back to the bank by the old borrower, a new loan is created to a new borrower. This is why I find our economy to be a Ponzi scheme of sorts.

When more than half of the amount of money spent in an economy is based on borrowed funds (happening right now in North America and much of Europe), it is the borrowed funds that is creating the impression of a healthy economy, and that is driving demand. This isn’t real growth. When demand increases, two things happen, prices go up and production increases.

We are currently seeing prices escalate not because of increased production cost, but because goods are sold to the highest bidder (a bidder with borrowed funds). This has a detrimental effect. It precludes the lower rung of society from participating in the economy.

If we divide society into three categories of the rich, the middle-income and the poor, the reaction would be that the rich will be able to afford what they want, the middle-class will borrow more to afford the necessities, but the poor and the unbankable, who have no access to borrow, will have to forego the goods they need.

If we follow on with this debt-based economy, there will come a time where the middle-income segment will run out of borrowing capacity. They will slip into a new class that is bankable but unable to borrow anymore as they have exhausted their credit, and are now using huge amounts of their income to service loans. Inevitably, this will destroy the economy, and force extreme frugality upon society.

It would be better that no form of consumer loans existed. This would mean a world with no credit cards and no personal loans, no home loans and mortgages and no car loans. The effect of this will be hugely positive.

Imagine this for a moment:

If there are no automobile loans, two effects will come about. One, cars would cost less and there would be fewer vehicles on the road. Less cars, and more public transportation, would result in limited pollution and lower greenhouse effects. Subterranean maglev trains running from New York to L.A, for example, would provide government funded infrastructure.

Furthermore, there would be a real chance to minimize hard-core poverty. More people would be able to take part in economic progress because it wouldn’t cost so much for everyday items. Everyone gets to consume at the level of what they can earn, not what they can borrow.

I grew up in a family where borrowing, in any form, was looked down upon. Many of our grandparents carried the savers-mentality, believing that frugality led to wealth. In my family, our cars, our house and everything that entered our front door was paid for in cash. I do the same with my family today. What we can’t afford, we forego. By doing this, we live within our means and we don’t waste. Even in the wild – jungles, for example – its inhabitants take only what they need, and not an ounce more.

Gandhi once said that this world has enough for everyone’s need but not for everyone’s greed. Debt promotes our greed and materialism; it creates artificial demand and places a stress on our planet while robbing away basic necessities from others.

But, if we are this far deep in debt, how do we reverse this? That’s going to take some ingenious planning; however, it must be done. We need to bite the bullet and abolish consumer debt and credit. In the words of Shakespeare, “neither a borrower nor a lender be, for loan oft loses both itself and friend and borrowing dulls the edge of husbandry.” Once we get accustomed to spending money we haven’t earned, that indeed spells the beginning of our end.