My eyes are throbbing. It’s almost midnight and I’ve been stuck in my office since 7:30 this morning… writing and researching on the computer with a headset wrapped around my dome. I must have taken 50 calls today and yet didn’t have the time to take even one of the four calls earlier from my wife. I feel like a jerk for that.

Come to think of it,  I haven’t eaten in almost 9 hours. Looking over at the corner of my office I see my Perfect Pushup grips lying on the floor – remnants of my quasi workout earlier this afternoon. After sitting in this chair for so long I think my blood is going stale. I haven’t seen my son today…. I smell ripe… shit! I almost forgot. Tomorrow my wife and I are going for an ultrasound appointment and we’ll find out if we are having a boy or girl in June!

What the hell am I still doing in my office??!!

In the middle of launching the most exciting company I have ever been a part of; and the workload is probably 5 times what any of us involved expected (that seems to always be the case with new ventures).

We are at the stage of the startup process where the dice are about to dance on the table. The rubber is about to hit the road… and the preparation we have done to this point will most certainly dictate our success six months down the line. We are deep in the tech startup trenches.

The true colours of everyone involved in this new venture are starting to show. I can happily report that I wouldn’t want to be with any other group of entrepreneurs. They’re all grinders here, willing to sacrifice their lifestyle, and probably their physical health, to achieve this common goal we have. What a team!

Everyone involved in this startup is a true ‘winter soldier’ – which is exactly what is needed if you want to be successful in starting a new business. And knowing that all my partners in this project are that way, I don’t dare take my foot off the gas. The culture has been set by how everyone has acted. There’s no room on this ship for prima donnas… winter soldiers only.

During the Revolutionary War Thomas Paine coined the phrase ‘summer soldiers’. If you were called one, it was a great insult.

You see, during the war, in the summer months, men would flock to join the battle as they had romantic visions of fighting in the sun for the cause. But, as winter drew near, and the cold set in, those idealists retreated, fleeing the army because the conditions were too harsh. Hence the term ‘summer soldier’ (also known as a sunshine patriot).

On the contrary, winter soldiers are deemed to be hardcore. They’re tough and willing to persevere, almost reveling in moments of anguish.

What to be Prepared for as an Entrepreneur

By no means am I comparing war with entrepreneurship, but when starting a new venture you better be ready for a unique kind of battle. You will be forced to make sacrifices on almost a daily basis.

If you are not prepared to give up your free time, much to the frustration of your family and friends, you’re in for a shock. If you aren’t capable of operating at optimal levels on 4 or 5 hours sleep, you better learn to be. When you’re grinding 15 hours a day you’d better be prepared to give up your yoga class and gym routine. And get comfortable with that extra 5 to 10 pounds around your waist because you had one too many junk food dinners at the office. If 80 hour weeks scare you, well… you’re not going to make it. And even if you can handle all of that, there’s still no guarantees of success, pal. How’s that for romantic?

If you want to be an entrepreneur, get ready to grind. You need to have the mentality of a winter soldier. Now, if you’ll excuse me, I have work to do. 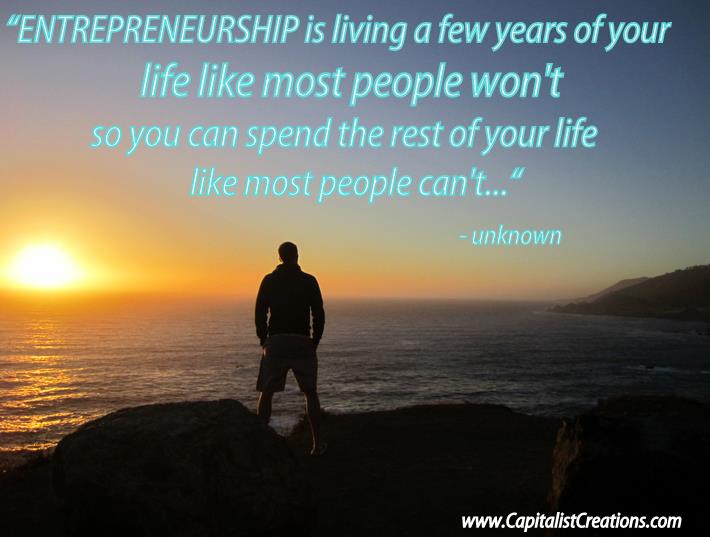 How Much Can Your Tenant Afford in Monthly Rent?

Why The Government Might Regulate and Tax Tall People