That’s a wrap! CES 2018 is over, and it’s great to be home… anytime I spend more than 48 hours in Vegas I’m thrilled to get back to reality.

Every year, CES showcases today’s cutting-edge consumer technologies. However, it also highlights the herd mentality of engineers, entrepreneurs, and large companies. The couple hours I managed to sneak away from meetings to walk the floor at CES this past week were, as in previous years, somewhat redundant… lots of hype, many copycats, but little wow.

There were hundreds of similar technologies/products at CES 2018 despite advertising themselves as ‘innovative.’ That said, there may be no better place on earth to see capitalism thriving than at the annual CES in Vegas. It’s a capitalistic spectacle; entrepreneurs, programmers, marketers, and multinationals all came together to show off their latest creations (mostly to get PR coverage mind you). 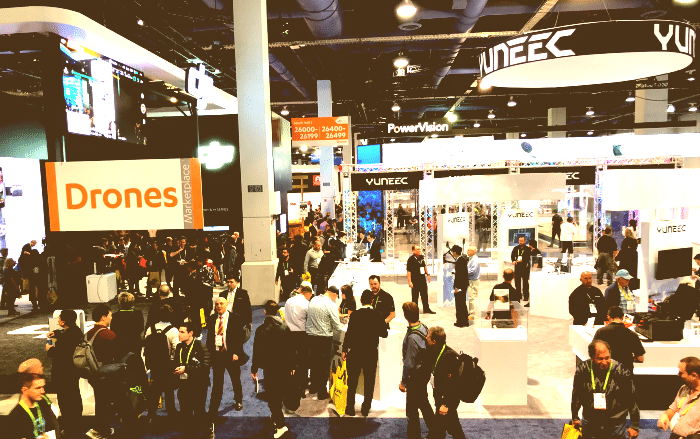 The real business at CES is done outside the conference center and after hours, over drinks, dinner and private presentations, which is why I was there. And for that purpose, it’s fantastic! There is no better opportunity to network and potentially build alliances in the tech world than at CES – but you better have a vibrant and quick pitch. Those that matter, potential partners, funders, etc., are busy as hell.

I was there to meet with manufacturers, engineering firms and, of course, to socialize, which included a stop at Omnia nightclub to kick off CES 🙂

Mind you, if you’re a single guy, which I am not, you may want to pick a different spot to party while at CES as the tech community is not known for its high girl to guy ratio. If you want to cut loose and turn it into a more ‘conventional’ Vegas experience as it were, single men shouldn’t go to CES sponsored events. Women, on the other hand, if you want free drinks and a trail of dudes behind you, go to CES sponsored parties.

Side note: Funny thing happened at CES, the world’s most teched-out conference… there was a blackout during the show which, of course, crippled companies’ abilities to show off their latest gizmos and gadgets for an hour or so. The hashtag #CESblackout2018 quickly made its way on Twitter – funny and ironic. Energy powers tech, not the other way around. Let’s remember that before bashing fossil fuels.

At CES you see just how much of consumer tech is about copying others while making incremental improvements. Perhaps that’s driven by the desires of the manufacturers (mainly in Asia). Scaling up or retooling a production facility for a novel product with unique parts comes with tremendous risk to the manufacturer. However, a new, slightly modified (copied) version of a GoPro, for example, doesn’t require much change from a manufacturer. Building similar products as done in the past comes with high margins and lower risk for manufacturers.

There must have been a couple hundred drone companies at CES once again this year, all with there own, seemingly trivial in many instances, differentiators from the rest. (Although there was a very cool dolphin-like drone showcased)

If you want to know why GoPro’s stock has been sliding virtually ever since it went public, just go to CES…

CES 2018 was inundated with GoPro-like products. Action cameras from Asia and America saturated sections of the convention floor, and it looks like the once-bankrupt Kodak is trying to make a comeback by entering this space. New trends in this highly competitive space are 360-degree cameras, and 3D action cameras – which I think (at this stage of development) are a total bust… they appeared to give a fisheye view with the edges of the field of view quite blurry. Gimmicky and in need of refining.

The auto sector has some very cool innovations coming out, chief among them are the curved screens for center consoles. These look very, very slick, with clear benefits to the driver and passenger. The new versions of digital center consoles I saw take the Tesla center screen console to a whole new level. But once again, the copycats are everywhere; and although costs for these are going to be very high when first commercialized (2020-2021) according to one auto executive, it will inevitably be a race to the bottom as curved screens in cars become the norm. These consoles will be very cool for drivers/consumers, but the competition for entrepreneurs and innovators will be insane in this niche. (some digital rearview mirror concepts were cool to see, but further from commercialization)

Brilliant Marketing by Netflix at CES 2018

One unique group at CES that appeared to be operating in a league all to their own turned out to be a marketing stunt by Netflix… they called themselves PsychASec. The first clue it wasn’t a real company was when I looked online and realized they did not have a website. Nonetheless, a great lesson in marketing provided to us by Netflix. You better believe I’ll take a look at this show whenever it’s released. You should have seen the crowd around this booth. Sex sells. People were asking questions, and the supposed employees of PsychASec were answering. It was an elaborate marketing effort. Bravo, Netflix! 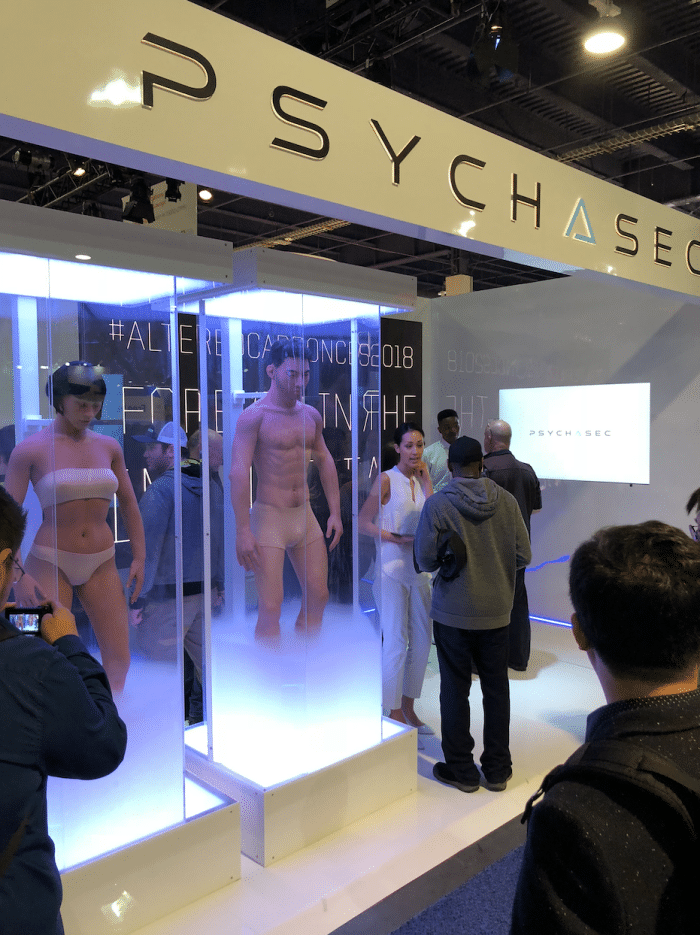 Mobile is Stuck in the Mud – Sort Of

Mobile phones continue to make small, incremental improvements that provide little enhancement to their UX. If there is one sector desperate for a leap in innovation, I think it’s mobile. Think about it: what’s changed in mobile devices that make a difference in the UX in the last 18 to 24 months?

That said, Huawei appears to be ready to take even more market share from Apple and Samsung with the launch of their Mate 10 later this month. I attended the Keynote Address at the Venetian led by Richard Yu, CEO of Huawei Consumer Business Group. The Mate 10 is going to be a winner.

In the last six years Huawei has gone from less than 1% global market share in the mobile market to now number 3 (approx 11%), behind only Samsung and Apple.

One trend in mobile that surprises me given how commoditized smartphones have become is the prices for premium phones continue to increase. Everyone thought Apple’s iPhone X at $1,000 was a ballsy move by the company. Well, Huawei, who doesn’t have the street cred of Apple (not yet at least), has its premium Mate 10 retailing for around $1,200!

The Mate 10’s built-in, dedicated AI chip is somewhat of a first mover in the mobile space and WILL be the norm moving forward.

That leads me to one of the most exciting and opportunistic markets: AI.

The Sectors Investors and Entrepreneurs Should Be Excited About

Although CES 2018 certainly had its share of AI-related technologies on display, the possibilities are truly endless at the moment for this sector. Most AI companies at CES 2018 are approaching the industry in a novel way, and for different applications.

Many bigwigs at CES focused on meeting with AI innovators. While most of CES is merely a show and tell of hairline varying technologies or products, business was being done at the show with AI firms because they were very different from one another and solved clear pain points for large companies and markets.

Over the next 12 to 18 months, hundreds of innovative AI startups will be acquired. Many large corporations are panicking because their internal R&D initiatives are floundering in the AI space, according to one executive of a Fortune 500 company I chatted with. We are nearing peak FOMO (fear of missing out) in the AI space for big corporations. And for investors and entrepreneurs, that should get you very excited.

Lastly, the consensus at CES 2018 of the biggest change coming for the tech industry, aside from advancements in AI, is the quickly approaching 5G network – literally 100 times faster than the network capabilities we have today. Ponder that…

Think about the exponential increase in data transfer capabilities that are coming to everyday Joes. You think social, sharing and online activities are massive right now? They will increase by an order of magnitude when 5G goes mainstream, opening the door for many new online platforms and opportunities once unimaginable. Read up on 5G here. AT&T, for example, plans to launch its 5G network later this year. Smartphone companies have already built phones for this game-changing advancement. AI is going to explode when 5G goes mainstream. And new sectors will spawn from it.

CES 2018 was a great time and fruitful for my venture. Despite the almost three days of rain in the desert – the first time I’ve been to Vegas and felt raindrops, real ones at least – the atmosphere was energizing. Although I may have been hard on all the copycats at the show, it’s always a pleasure being around tech developers and entrepreneurs who are putting it all on the line for their latest and greatest. It’s inspiring. And I think that’s why CES is an annual must-do on the conference circuit for entrepreneurs in the tech space, venture capitalists, and serious investors. A great conference to kick off the new year and fire you up.

P.S. I travel around the world in search of profitable opportunities, and to bring you, my valued reader, boots on the ground knowledge so you can make better investing and business decisions. Subscribe to my newsletter below to receive my best content in your inbox. It’s a no-brainer.