[dropcap style=”style1, style2, style3, or style4″]T[/dropcap]he desire to impede, encroach and trample on a person’s rights, freedom and liberties, is typically characterized in America by the continuous and tenacious assault from occupants in the White House – and much of the Left – on the right to bear arms.  In the same vein, a new showdown, something far worse, looms on the horizon for America. I fear it is a battle that will dismantle nothing less than American hegemony itself.

Guns first… the Internet, next.

There are two factions looking to control the Internet; one group, much of the free market and business world, wants to give it order and promote growth, while the other harbors nefarious and Orwellian intent to trample on a person’s rights, freedom and liberties. Guess which side the government is on?

Both sides have a lot to gain, the first group, market share; the second, political power. With one, we the people benefit; with the other, the loss will be total, and catastrophic.  In response to this, there is already talks that will, in the words of Google’s Executive Chairman, Eric Schmidt, “Balkanize the Internet”. That must not happen, as it will tear at the heart of American capitalism. If the Internet is limited, or easily monitored, or given to the NSA to freely rummage through, the rest of the world will disassociate themselves from our platforms.

New Snowden leak: NSA is monitoring the Internet histories of millions of Americans

$14 Trillion is at Stake

The Internet has come to be the single greatest force to sweep across humanity. Devices that connect and form the Internet are so extensive and pervasive, that we now stand at the precipice of the Internet of Everything (IoE). This IoE can potentially include every component of every part of everything and locate it, diagnose it, view it and manipulate it in real time. It’s the On-Star for everything – from human-human contact, to human-machine contact and machine-machine contact – regardless of the spacial distance between the two. IoE sounds like it is straight out of Star Wars, but I assure you, it is the real deal and will add fortunes to the free markets that adopt it.

What on Earth is the Internet of Everything?

The vision of IoE is to connect 1.5 trillion objects. At present, only 0.6% of the things that could be connected to the net, are. That’s a 99.4% void that needs to be filled, and likely will be filled. If the Internet of Everything materializes as planned, experts estimate that it will create a new $14 trillion market (Cisco’s John Chambers Has Found A New $14 Trillion Market). No, that is not a typo – it is trillion with a T. That number does not include the trillions more in efficiency improvements, and trillions more in the multiplier effect.

That’s when the game really gets interesting. Imagine what the IoE could do for the unemployment rate in this country…

I am not suggesting that the Internet could be turned into some monstrous device, or that it could inoculate our consciousness and turn our toasters against us. No! My perspective on this is different. I am looking at a US government that is attacking the freedom and privacy of the Internet, so much so, that other countries are planning to get out of the Internet that we control. If they succeed, that indeed would be the Balkanization of the Internet, and whatever part of that $14 trillion market we want to see materialize, would vanish into thin air (at least for our economy).

The rumblings have begun. A meeting between the major Internet organizations, like ICANN and others, held in Uruguay in October 2013, resulted in a pledge, unanimously adopted, to liberate each organization from the oversight and control of the United States. Until now, ICANN has been reporting to the US Department of Commerce. In Brazil, President Dilma Rousseff has set in motion measures to disengage the country’s Internet from the control of the United States. They are even willing to go to the lengths of submerging undersea cables and circumventing the US altogether while building a strong encryption system that protects privacy. China and Russia, on the other hand, have appealed to the U.N. to split the governance of the Internet and spread it across global governments. Imagine that.

I can see the benefit of the pledge for those countries to remain independent. And I agree with the higher standards of encryption for communication suggested by President Rousseff. What I can’t see, and what I fear, is the extrication of any nation from the current form of the Internet, or the circumvention of the United States in any new Internet that emerges. That is unacceptable. That move would indeed be the death knell for the Internet and set us, global citizenry, on the path towards regionalization of the Internet, which, in my opinion, defeats all purpose and weakens the people, while strengthening the ruling class. A divided people will become easy pickings for regional tyranny.

The rightful owner of the Internet must continue to be the people. That much is evident. Under no circumstance should it be diced up. Any machinations of controlling the masses, within or without borders, is not acceptable and it is counterproductive.  Think of the Internet as a sovereign with the world’s population as its citizens.

The Internet is This Generation’s Fourth Estate

Being the Fourth Estate, the Internet must be given the protection that is appropriate. Control of the Internet must be spread across a distributed platform, with no one government having a kill switch – no one being able to manipulate the trends and communications. It is the source of information, opinion and the closest thing to the naked truth our species has come across. It must remain so. In a world where news is manipulated based on the political affiliations of the portal, places like social media and blogs must be protected. Information is the key to freedom.

The Arab Spring, and the other uprisings across the globe, were not caused by the Internet, they were facilitated by it. People made it happen of course, but the Internet connected the intentions, frustrations and resonated the voice of the people. It gave the movements momentum.

The Internet is not a tool of the government’s meant to monitor and organize civilization’s affairs. It wasn’t created for government to control and monitor the people who elected them. It is a way to unshackle the chains of totalitarian governments on its people. It, by far, is our generations best way to spread freedom. But the irony is that the largest beacon of freedom and privacy got caught not doing as it preached. Or at least it was used by our government as such.

There goes $14 trillion, and then some

The myopic view of the NSA, and those within the corridors of power who authorized this, knew exactly what they were doing. It wasn’t an accident that encryptions were intentionally watered down to allow the NSA to take a peek. Not only did they make it easier for themselves, it gave hackers a field day. We have technology to prevent hacking, yet the NSA was the cause behind it not being instituted. So every hack that happened because of weak encryption, now has a face.

The risk now is that the $14 trillion price tag which could have largely flowed into the floundering American economy, is now in jeopardy. If the world no longer trusts us to handle the Internet, and collectively chooses to fragment it, American companies may follow the demand for infrastructure and move offshore, which will be a negative growth scenario.

The current level of internet infrastructure in the US is based on serving the world. If we only need to serve those within our borders, there is an overcapacity. As such, not only will the new demand for the IoE evaporate, there will be negative growth in terms of replacement value.

American hegemony has evolved, but has it stalled? 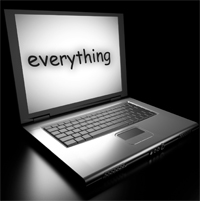 The Internet of Everything, and beyond, will bring our species closer and slowly begin to erase our borders. The opportunity was within our grasp to host and lead the IoE and to serve up freedom, and look like the good guy doing it. However, thanks in large part to the NSA and paranoia of our government, the world has stopped looking at us with admiring eyes (Germany’s Angela Merkel: Relations with U.S. ‘severely shaken’ over spying claims). They now look at us with disdain, and this is a pity because we do have a lot to share and a lot to gain from an open world.

Our hegemony was a benefit for many people around the world. We did win the hearts and minds of many nations over the past 100 years. But with one fell swoop, the White House, who should have had knowledge of the eavesdropping, blew it. So either they didn’t know about what their agency was doing, which means they are not good managers, or they were complicit. Judging from the fact no one was fired… well you can guess what that means. Let’s not forget the IRS files.

The sheer magnitude of the incompetence (or, worse) now has a price tag. The dollar value is $14 trillion and change. The implicit value is the loss of American hegemony in the electronic frontier – which for all intents and purposes is the new frontier.