Back to insights
Raising Millions for a New Kind of Mayonnaise 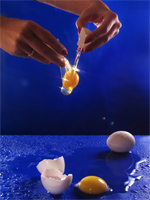 I’m no Rocky Balboa. I find raw eggs repulsive and studies have shown that they are not meant to be consumed by humans. Unfortunately, there are a number of processed food products that taste brilliant, but they contain unsavory things such as raw eggs.

Take mayonnaise, for instance. I don’t go near it, because it contains raw egg yolk. Uncooked eggs are unhealthy and can potentially contain salmonella, among other unwanted bacteria. In light of mine and millions of others’ disgust in consuming raw egg, a new product has hit the market. It is an edible substitute for mayo created by Hampton Creek Foods. It’s called Just Mayo.

Just Mayo is made from plant based ingredients instead of raw eggs. In fact, everything that Hampton Creek Foods makes, and plans to make, comes from plant-based ingredients rather than animal-based. I know what you’re probably thinking. This sounds like a novel idea, but how big is this opportunity? Well, as we always promote here at Capitalist Creations, great startup ideas flourish when they conquer a niche within a niche. And Just Mayo is a huge opportunity.

[Tweet “This #startup raised over $30 mill for its mayonnaise”]

You see, Just Mayo is more than a product to replace mayonnaise in household fridges. It’s an enabler for an entire industry to change its ways and accommodate a growing consumer demographic that is health-conscious; from bakeries to delis, to caterers to vegans, vegetarians, and those medically unable to consume eggs, Just Mayo has created a whole new market by attacking one very simple niche.

Major venture capitalists agree with Hampton Creek’s vision. They see massive potential with this product. In fact, Hampton Creek Foods just received a $23 million Series B infusion from none other than Horizon Ventures, who led the most recent round. Horizon Ventures is the investment arm of Mr. Li Ka-shing, presumably Asia’s richest man.

Other investors in this round include AME Cloud Ventures, Ali and Hadi Partovi, and Jessica Powell of Google. In all, they have managed to raise $30 million over the last couple of years and that includes money from heavyweights like Paypal’s Peter Theil, Microsoft’s Bill Gates and Yahoo’s Jerry Yang.

Hampton Foods is led by CEO Josh Tetrick, who is also its co-founder. Josh is a West Virginia University graduate and a Fulbright scholar. His involvement with teaching street kids in Nigeria and South Africa is just one of the many socially responsible acts that have been the hallmark of his purpose. Under his guidance, Just Mayo has evolved from a simple idea to a product now available on the shelves at major food stores.

If managed well, this company has the potential to take the world by storm, and feed a population that is craving healthy food without the risks inherent in raw eggs. It also serves the vegan market. By providing an alternative to eggs, it accomplishes two things: First, it alleviates the egg farming process which, by some standards, are inhumane. Second, it addresses a market that won’t eat eggs, by choice, or can’t eat eggs for health reasons. As crazy as it may sound, this is a disruptive invention to the condiment market…

With the latest investment from Horizon, Hampton Creeks gets more than just venture funds, they get to anchor in Asia with one of the most influential men in the region. His investment will unwittingly open doors for Hampton Creeks across the East. I see this as a huge bonus. Already, the company is planning to triple its workforce to meet anticipated demands.

Hampton Creek Foods’ impressive repertoire of early stage investors, that reads like the who’s who of business and industry, is a strong statement. Some very smart people have given their seal of approval and put down hard cash to back it. That strength will open doors and improve negotiating terms on better shelf space.

Another thing I really like about Hampton Creek Foods is that there is more to this than just eggs. The company is trying to replace animal products in food with plant products, across the board. I am pretty certain that other products will enter the offering mix for two reasons: One, it’s profitable – a jar of Just Mayo is almost double the price of a regular brand of ‘real’ eggs mayo; and two, the demand is large – not just the vegan market but all those who are conscious of the environment, those who are concerned with the spread of viruses and organisms in fresh eggs, and companies that want to cater to these people. That covers the consumer market as well as the commercial market – a huge piece of the pie.

Far be it from me to consider the weaknesses of the company after some of the most astute businessmen in the world have given this their thumbs up. But to me there is one problem I see lurking in the shadows. And that is competition. A market with this untapped potential can’t go on without competition for long. The barrier to entry for this product, or any plant based product, is not that high. A marginally well funded company could come up with a competitive product and undermine market share. I don’t see anything to stop them.

Right now Hampton Creek Foods’ urgent goal should be to gain a dominant market share. Getting market share will come down to one thing: spending money to get the word out, because I believe the product sells itself to the target demographic.

Hampton Creek Foods need to blanket the food market with their brand name and become identifiable with those who understand the value of plant-based egg substitutes. That will take some smart planning, and it seems they are already going after the world market, rather than just playing in their own backyard. Good for them. Being first to market matters.

The key to success for Hampton Creek is to keep their research division aggressive. With populations rising and meat rearing conditions bordering on inhumane, there is a certain market for plant-based substitutes; however, it can only go mainstream if there is no aftertaste in the food, and consumers  don’t have to change their food preparation practices.

In my opinion, there is a huge potential for anyone who can crack the code of substituting plant ingredients for meat ingredients, and do it without the need to sacrifice taste, texture and cost. Hampton Creek Foods seems to be on the right track for that.