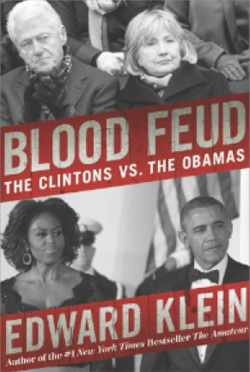 Ed Klein is a brilliant investigative journalist/author. I discovered Klein’s genius after reading his book The Amateur, which documented, through many anonymous sources in private meetings and such, the inexperience of Barack Obama. That book was released months before the 2012 election and made the New York Times #1 Bestseller – and it was a prelude of sorts to Klein’s new book, Blood Feud, which I recently finished reading while in Chicago of all places.

Blood Feud documents, once again through close contacts to the Obamas and Clintons, the growing animosity between the two families – primarily the disdain Barack Obama and Bill Clinton have for one another.

It’s a fantastic, quick read that gives you a behind the scenes look into the divide in the Democratic Party. The political party’s more centrist members favor the Clintons, while the growing far-left seem to support Obama. Currently, there is a struggle for control over the party between the two political families.

1. The DNC, and its huge group of funders, is under the control of Obama right now. And he wants to keep it that way, well after his tenure in the White House. Obama wants to select the next DNC chair, which is rather unusual for an outbound President. Bill Clinton is furious about this as he feels Obama should hand the reigns over to him and Hillary Clinton given that she is the most probable candidate to lead the Democrats in 2016.

2. Bill Clinton is in awe of Obama’s data and analytics gathered during his 2008 and 2012 campaigns, and believes it was a huge contributing factor to his victories. Clinton wants access to this database and the social media aspects to ensure a successful run for Hillary. Obama does not want to give this up to Bill and believes it should be scrapped for 2016, or so he has insinuated. I speculate he wants to hand it over to another candidate of his choosing – likely someone much further to the left than Hillary.

4. Similar to the GOP, the Democrats are a divided party. They have Clinton supporters, more left of centre-types, and they have the extreme left-wingers, a la Elizabeth Warren. Obama has disappointed both groups during his Presidency.

5. Michelle Obama is considering a Senate run. Just as she is for Obama, Valerie Jarrett, his Senior Advisor, wants to be Michelle’s right-hand woman if she runs.

6. Valerie Jarrett is arguably the most powerful person in the White House.

7. Valerie Jarrett did not want Bill Clinton to stump for Obama in the 2012 election. But, in a rare instance of defiance against her, and out of fear of losing the election, Obama went with advisor David Plouffe’s advice to court Clinton to campaign for him.

Despite Bill’s resentment toward Obama, he saw an opening to build support for Hillary Clinton’s 2016 run. He figured that if he supported Obama publicly, and helped him get re-elected, then Barack would support Hillary in 2016. However, after Obama won in 2012, he cut virtually all communication with the Clintons for several months.

8. To this day Bill Clinton believes that his campaigning efforts in 2012 got Obama re-elected.

9. Bill Clinton has a penthouse suite above his Presidential Library in Little Rock Arkansas – a place he likes to host parties and get away to when he wants to strategize for Hillary’s upcoming campaign.

10. Both Bill and Hillary have had plastic surgery…
11. Obama still smokes, despite statements that he quit years ago. I guess it takes a few kicks at the can, even for a President.

There are many interesting details about this growing political rivalry between the Obamas and Clintons in Edward Klein‘s book, Blood Feud. Prior to the 2016 election, if you’re a political junkie like I am, this is certainly worth reading for its pure entertainment value alone. Klein foreshadows a Democratic fight for the White House in 2016 with members of the party being divided between the Obamas and Clintons. Should be interesting to see how it all pans out.

One of the Most Persistent Entrepreneurs of Our Time

California is the Armpit of America But There’s Still Hope