Back to insights
Are Your Beliefs and Opinions Authentic?

Are your thoughts and opinions authentic or are they manufactured by the media? Do you ever vet the talking points of the nightly news, or do you just accept it as gospel simply because it’s on T.V.?

Our conscience is constantly under attack. Billions of dollars are spent on PR campaigns by special interests and political groups in order to sway our opinions and advance secret agendas. These PR campaigns can be subtle, and are meant, in most instances, to be covert. Sometimes they are used to create distractions from more important issues, while other times they are used to create a false narrative to reality. Regardless, they are always used to try and control our opinions and beliefs.

[Tweet “Are your thoughts and opinions authentic or are they manufactured by the media?”]

The media is constantly being used in these campaigns to push whatever agenda is paying their bills. This is one of the reasons why I constantly critique the mainstream media as a state-owned enterprise, and encourage every one of you to find alternative sources of information, from the Left, Right and Libertarian point of view.

If you’re not forming your own authentic opinions, and making a real effort to understand what is really happening in our world, you’re a sucker and deserve to played. So wake up.

To help you wake up from your trance and sheeplike existence, I recommend reading Glenn Beck’s highly entertaining and crisply written book, The Overton Window. 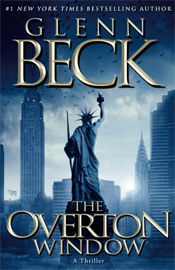 The Overton Window is a fictional story, but Beck does an amazing job bringing in historical events to help make it more relatable and therefore more powerful.

This masterpiece of Beck’s will help you realize that much of what we see on TV, particularly from the mainstream media, has been strategically aired for an agenda you likely never knew existed.

The main character in the book is a young PR guy named Noah. His rise up the corporate ladder, thanks to his Daddy’s social status, has given him a shrewd ability to manipulate public perception. However, after being seduced by a young, sexy brunette in his office, he is exposed to the Libertarian point of view and the constant attacks by his government on its own people. This vixen encourages Noah to question some of the tragic events that recently transpired in America, and to dismiss the fact that they may just be coincidentally timed. He has an awakening to the corruption and hidden agendas of the powerful.

As the story progresses Noah begins to realize that, just like in his own career as a PR man, facts can, and often are, manipulated by politicians and special interest groups to shift the framework of society over the long-term. As he digs further down the rabbit hole, being led by the sexy brunette, Noah realizes that his own PR firm, ran by his father, is shoulder deep in the manipulation of public perception for the sake of a shadow government’s corrupt agenda.

Everyone has their own ‘Overton Window’ based on their values and personal experiences and opinions.

Just imagine looking through a hypothetical window. The middle view of that window represents your perfectly acceptable society; to the very left is your version of extreme, and to the very right is the opposite extreme (consider it a political extreme to the left and right). Neither extremes, from your point of view, are acceptable. Your ideal, in other words the middle of your Overton Window, has the perfect balance between the rule of law and personal freedom.

Depending on what side of the political aisle you side with will determine how your middle view looks and what your extreme left and right are.

The majority of the population has a similar Overton Window, which plays to the advantage of the shadow government, PR firms and special interests. Here’s why:

When a government or special interest group wants to shift the broad population’s opinion to help advance its agenda, be it toward a more right or left-wing way of society, they hire powerful PR firms to help shift our Overton Window through various campaigns. The catalyst behind these campaigns is the mainstream media. They sell the idea…

If the powers that be want us to accept a more socialist society, they must shift our Overton Window toward the left so that what was once our extreme left is now closer to our ideal (middle) view. How do they do that? By capitalizing on extreme events, fear and economic calamity.

In 2008, during the financial collapse, the Democrats saw an opportunity to shift the general population’s Overton Window toward a more socialistic society. Democrats, and the hired PR firms, used the media to attack capitalism and the supposed greedy Wall Street bankers. Wall Street, according to the media, was solely responsible for the nationwide personal bankruptcies and economic woes middle-class America was going through. This narrative was broadcast across most major media outlets. As a consequence of Wall Street’s greed, America needed to immediately enact government funded social programs, job creation stimulus and partial nationalization of banks in order to save the middle-class victims, or so the Democratic narrative explained.

Policy that would have been laughed at, and been considered political suicide, in 2004 was now accepted and deemed necessary because the general public was in a state of shock and despair after the economic collapse.

So in 2009, because the PR firms and special interest groups successfully convicted Wall Street in the court of public opinion, via mainstream media’s misleading reporting, many Americans’ Overton Window shifted to a more socialist view, unlike anything seen since the Great Depression. This paved the way for more government control in America over the economy, more cumbersome regulation and less of a capitalistic society.

Lost in all the media bullshit reporting was the main catalyst for the economic collapse: Bill Clinton’s lending and housing initiatives of the 90’s, which pressured the banks into taking on riskier mortgages.

To this day, most Americans will tell you that Wall Street greed was to blame for the housing bubble that sent the American economy into a tailspin it has yet to recover from… mission accomplished for the PR firms.

Another example of using a catastrophic event to shift Americans’ Overton Window: 9/11.

Before 9/11, the act of a government agency spying on its citizens’ emails, phone calls, Google searches and text messages would spark outcry and revolt. It would have been viewed as a blatant violation of civil liberties. But by successfully using the tragedy of 9/11 as a rallying cry to hunt down terrorists by stepping up domestic surveillance, the Patriot Act was established and Americans turned their backs on their own privacy. The fear stirred up from 9/11 shifted Americans’ Overton Window regarding acceptable domestic surveillance.

In the book, Beck states “When your mind suspends disbelief, it may also become more willing to consider a broader spectrum of possible outcomes to the events and agendas that are playing out around us every single day.”

Here’s an interesting fact that was brushed aside around the time of the 9/11 terrorist attacks because, once again, Americans’ Overton Window shifted:

In late summer 2001, Donald Rumsfeld (then Secretary of Defense) admitted that the US government could not account for a missing $2.3 trillion in defense spending. The date of the announcement: September 10th, 2001.

One would think such government waste would ignite revolt from the general public. Pentagon spending should have been cut due to public outcry from all the bureaucratic waste. However, no such thing happened. Instead, thanks solely to 9/11 and the fear it created, Americans were more supportive of defense spending than ever before, and even willing to give up some of their own rights and freedoms to boot. As a consequence of the Overton Window shift, defense spending increased by roughly $65 billion within two years and the NSA stepped up its domestic spying.

To move the window toward their ultimate goal, those pushing an agenda have to introduce radical ideas that fall outside the current comfort zone. While those radical ideas will be dismissed, it does, in the process, shift the window toward their goal (i.e. government intervention in banking, the automobile industry, spying on their citizens, invading foreign nations).

In an era of laziness and ADD, governments across the globe are having an easier time misleading the public and pushing through policy that our Overton Windows of ten years ago would view as too extreme.

We live in the information age, so why aren’t we educating ourselves with the plethora of data at our fingertips? Why have we settled for sound bites?

Don’t let the mainstream media control your thoughts and opinions. Create your own by doing thorough due diligence. Be authentic. You can start by reading Glenn Beck’s The Overton Window.