Entrepreneurship comes with tremendous challenge and massive pay off for those who succeed in overcoming hurdles. At the end of the day success or failure comes down to your degree of perseverance. For the greatest of entrepreneurs, those who manage to change the world with their offering and defy the odds, there is a place in immortality. No longer are kings and warriors remembered in the annals of history; it is the wildly successful entrepreneur who fills the pages of our history books now. Take, for instance, Andrew Carnegie.

Andrew Carnegie, born in November 1835 to a lower class family in Scotland, lived in a small house in the poor neighborhood of Fife. The living room in his family’s home served as the bedroom at night and the dining room during meals. Food was scarce and the entire Carnegie family were always one meal away from going hungry. The family emigrated to Allegheny, Pennsylvania at about this time. It was a last ditch-effort to improve their own personal economic tide.

Do your duty… and then do more

Andrew’s first job in America was that of a bobbin boy, one of the poorest paying jobs in the country. In that job, Carnegie helped change sewing thread spools – not exactly stimulating work but he had a mission. Carnegie started early every morning and worked for 12 hours. It was at this job when he learned the importance of showing up and working hard everyday. It was also at this job where Carnegie learned that he wanted to be his own boss…

Carnegie once said, “Do your duty and a little more and the future will take care of itself.”

To me that is the quintessential character of a truly inspired entrepreneur. Being an entrepreneur is not about making a living, it’s about doing more than what is expected.

When Carnegie was a bobbin boy, he worked tirelessly for 12 hours a day without complaining, except to say that he could do more. That attitude quickly moved the young Carnegie up to the role of messenger boy. By the time he was 18, Carnegie was earning $4 a week. Now, that may not sound very entrepreneurial, but it was his journey to this point that helped him grow the characteristics needed to become one of the richest and most generous men to ever live.

Like many Scots, Carnegie was a natural saver. As his paycheck kept increasing, he kept saving.  Saving is an essential characteristic of an any entrepreneur. My mentor once told me that the most important component to being a successful venture capitalist is to always be liquid. The reason being is that you never know when that next undervalued deal will come along, so you’d better have capital. In order to be ‘liquid’ one must save and/or invest in liquid assets (cash, stocks etc.).

[Tweet “Do your duty and a little more and the future will take care of itself.”]

There aren’t many entrepreneurs I can think of that were big spenders when they were attempting to make a name for themselves. It’s not just a matter of discipline, it’s something about the psyche. When you are intent on making a difference, you tend to have the innate desire to focus, and frivolous spending is usually a sign of distraction or boredom.

As an example of Carnegie’s ability to ‘stay liquid’, let’s fast forward to his early days as a successful venture capitalist. When he had amassed his wealth to $20 million (and this was in 1898) he offered Spain his entire savings to purchase the Philippines. Extravagance does seem to be part of the entrepreneurial streak, but not while they are building their dream. Carnegie was the epitome of this discipline.

An Intense Focus on His Goal

Andrew Carnegie’s vision of becoming an entrepreneur was so intense that while he worked as a messenger, he poured his heart and soul into it and learned everything there was to know about the business. He figured that if he knew the business better than anyone, and could save up enough, he could one day become the owner. His tenacity and work ethic propelled him through the ranks and every step of the way, he would earn more. He saved nearly every penny. This then gave him the opportunity to buy into the very company that he worked for. He put all the money he had earned from the company over the many years he worked there and invested it right back in for ownership.  That opportunity only arose because he had saved and worked his ass off – proving himself to the top brass.

Needless to say, that investment paid off and after a few more reinvestment exercises, he plowed his money into the railways. This was visionary and very cutting edge at the time. We think of trains today as basic modes of transportation. But to really appreciate Carnegie’s brilliance, you would have to see it with perspective. At the turn of the century, the railway was perceived to be a risky endeavor. It was comparable to electric cars today, but perhaps even more doubted by the general public. And it was not easy to convince any one of the benefits of the railway. Regardless, Carnegie recognized what the railway could do for the early investors and for the country as a whole. He jumped in. Much like Elon Musk today, Carnegie was a real trail blazer and relished being one of the first to market.

The railway investments paid off and Carnegie continued looking for opportunities, one of which was investing in Story Farm. It so happened Story Farm was rich in oil and within a year his profits from that investment rocketed to $1 million (remember this is the late 19th century, so think of the purchasing power that million dollars had). At an average 3% rate of inflation from 1900 to today, that 1 million is worth about $29 million in today’s dollar.

Not only did Carnegie work exceptionally hard, he was very down to earth. And that came from his humble journey to the top. He participated in charity and gave his earnings to noble causes, among them were education and health care. A classic characteristic of successful entrepreneurs is their strong desire to give to the community. You can see examples of that all throughout history and especially in modern times. While many people and media members are quick to chastize the rich, the most successful of entrepreneurs are some of the most generous people on the planet. Let us remember that. 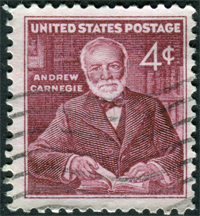 By the time Andrew Carnegie died in 1919, he was worth more than $350 million, $10 billion in today’s value. While I am not one to peg a man to the amount he amasses, it is merely a way to signify his contribution. The money alone is not the sum of the man or the entrepreneur, it is merely the result. Once retired, Carnegie began giving his fortune away by the millions, setting up pension funds for educators and funding research projects across the world.

For Andrew Carnegie, his ability to work hard and keep bettering his lot in life propelled him to heights unimaginable for most people; yet he started his life in such poverty most of us can’t even comprehend. Despite the odds being stacked against him, Carnegie never flinched. Maybe that’s what made him different from everyone else; maybe that’s what made him a Carnegie.

According to the New York Daily News, Carnegie was the 4th richest person to ever live… given his upbringing, he had every excuse in the world to fail and fall short of his goals.