Back to insights
The Character of an Amazing Entrepreneur

The idea of being an entrepreneur crashes through almost everyone’s mind at some point or another in their lives. Few people follow the idea through to fruition. For most, it typically ends up becoming a passing fantasy.

Becoming an entrepreneur is not the best way to make a living if one is just looking for an alternative to their cranky boss. In fact, being an entrepreneur isn’t about making a living at all. It’s about living a life of challenge and unpredictability. If that sounds enticing, then keep reading – you’ll enjoy this story.

Becoming an entrepreneur is hard work. It’s damn hard. It requires character, persistence, confidence, passion and humility – and a little genius to back it all up. Oh, one more thing: it takes guts…

Look at Travis Kalanick, an entrepreneur who I admire very much. He’s been described with expletives I can’t repeat here and he’s failed at different ventures in the past. But like all great entrepreneurs, he blocks out criticism and views failure as a great learning opportunity; and after failing, he’ll methodically move on to his next idea – except he’ll be smarter this time around.

Travis’ new idea, one we’ve written about on Capitalist Creations in the past, is epic. And this idea now attracts a multi-billion dollar valuation. Travis’ newest venture is Uber, and by now you’ve probably heard all about it. It’s somewhat controversial, and there is nothing wrong with that. All great disruptive companies are controversial at one point or another…

The tenacious entrepreneurs, and their companies that are valued in the billions, only get to such a level because they’ve gone through trials and troubles unimaginable to most; and after such difficulties they come out the other side better than ever. Travis is no exception and has had to make some very tough decisions along his entrepreneurial journey.

Every great entrepreneur, Travis included, goes through a life that could parallel a Greek tragedy – from betrayal to hardship and even losses that no mere mortal could endure. That’s one of the main attributes which makes entrepreneurs successful: the ability to persevere. As Benjamin Disraeli once said “There is no education like adversity.”

Travis is the genius behind a number of startups. His latest and greatest is Uber. The idea itself is simple. It’s so simple, in fact, that just about anyone could have thought of it. But coming up with an idea is only one small part of the entrepreneurial equation. It is certainly not the deciding factor on the road to success.

The important part of entrepreneurial success is what comes after the idea. Behind every great, and often simple, idea is an abnormal amount of energy and tenacity.

Entrepreneurs like Travis exhibit tremendous energy, persistence and the ability to peek into the future. No, I am not referring to any clairvoyant ability. I am talking about the vision that resides within the soul of every great entrepreneur. It’s the ability to see what the market needs and create a product that fits the need. Great entrepreneurs are always looking for ideas. When they are grocery shopping, for example, great entrepreneurs are looking for inefficiencies in the store (how do you think self-checkout was invented?). They can’t help it. It’s just who they are, and they make our world that much more convenient.

Once they see the market in need and determine a solution, entrepreneurs like Travis have to evangelize to the naysayers and pitch their vision. In Kalanick’s case, he had to go around persuading everyone from funders to government regulators on his concept (Uber), and that takes tenacity and clarity of purpose. 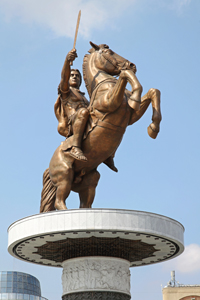 If you want to make it as an entrepreneur, you’re going to have to be willing to answer the hard questions and convert some of the pagans. Travis is battling fierce opposition with Uber, but he is not deterred, and the company is growing rapidly because of his ‘never quit’ attitude. Depending on who you talk to, he is either looked up to or hated. But that is just par for the course.

Alexander, Ceasar, Henry V,  Teddy Roosevelt, Steve Jobs and numerous other visionary leaders turned out to be polarizing figures. If everybody loves you, it probably means you’ve lost the plot and you’re not going to succeed. Even Gandhi had an entire group of people who hated him. So don’t be afraid of breaking a few eggs in your pursuit.

A Basket of Entrepreneurial Skills

Kalanick is a math genius, I’ve heard. He looks at demand curves and hypothesizes how they will affect his bottom line. His math skills, no doubt, help him with Uber, but that’s not the real reason the company is blowing up. Instead, it is his ability to look at a course of action and understand its ramifications and consequences, in advance, that is helping Uber take off from coast to coast. Across MBA programs in the country, this characteristic is called Effectual Reasoning and it is taught to aspiring graduates. It refers to predictive reasoning. In research undertaken more than a dozen years ago, business professors asked a simple question, “What makes an entrepreneur entrepreneurial?” The one thing they could identify across a group of successful startup gurus was this quality: Effectual Reasoning. Kalanick has this ability in spades.

Put all the fancy jargon aside and what it also takes to operate on Kalanick’s level is good old-fashioned hard work. Travis demonstrates this as well as any entrepreneur I’ve studied. He is a man with a purpose and he never stops working. His boundless energy and ability to work tirelessly has put him on the VC radar for more than one of his startups. His past associates in CrowdFlower and Scour attest to his zeal of accomplishing a vision by working tirelessly through the night. Weekends are more of a concept than a reality for Travis.

Getting Started as an Entrepreneur

To get an idea of who Kalanick is, you have to understand that he is a highly motivated individual. His passion to disrupt industries is what drives him to work 16 hours a day, seven days a week. There is not one cell in his body that is prone to kicking back. He is an all-go-no-quit-take-no-prisoners kind of person, and he has the brains to match.

Travis scored 1580 on his SAT before heading to UCLA’s Computer Science department. One of his first businesses was an endeavor called 1500 and Over. It was a program he developed to get students strong SAT scores. The story goes that the first person he tutored bested a previous score by 400 points.

Connecting with some pretty sharp individuals at UCLA, Travis helped spearhead Scour, an app that allowed people to share files. This predated Napster by 18 months and was a popular P2P search engine for almost anything that people wanted to share, be it music, images, files and such. Scour would crawl all the SMB ports and windows directories and find out what’s where. Like most of Travis’ ideas, he saw a need in the marketplace and filled it. Napster’s Shawn Fanning was one of its early users.

From Scour, Travis went on to Red Swoosh. Red Swoosh presented many tremendously valuable learning opportunities for Kalanick – none more important than how to deal with failure.

Being an entrepreneur means you’re the head designer, chief idea maker, head marketer and customer service lackey, all rolled into one; and if you do not have the energy to wear all those hats, one of two things is going to happen. Either you’re going to fail and quit, or you’re going to fail and learn. In Kalanick’s case, he failed and learned a hell of a lot. His hard hitting attitude at Red Swoosh finally got him a $20 million buyout from Akamai. Sounds lucrative, but it was a journey that made Travis the self-described ‘non-luckiest Entrepreneur of the year’.

Travis Kalanick on Failure and Ten Years of Entrepreneuring

They all did it. Edison, Carnegie, Kalanick, Jobs and every other entrepreneur that bootstrapped his way out of failure. They used their innate Effectual Reasoning, their hard work, confidence, passion and inability to give up, to get to where they wanted to be. Being an entrepreneur is about all the attributes and challenges documented in Kalanick’s story. Unfortunately we don’t see or hear about stories like Kalanick’s everyday. We typically only read about the glamor of entrepreneurship. But there are many Travis Kalanick stories out there, and for those who are willing to put in the effort and the time, just as he did, immortality is achievable.

Entrepreneurial success is a lego masterpiece built one small block at a time… the only one who can see the glorious castle about to be built, is you. It’s called vision. Don’t quit on yours.