With an Academy Award-winning biopic recently detailing the last year of his life, and his own zombie-centric historical fiction novel, there may be no former world leader more popular than Abraham Lincoln is these days.  As entrepreneurs, there is much we can learn from one of the greatest presidents in US history.

Traits of an Entrepreneur

From his humble beginnings, living in a log cabin in the backwoods of Indiana, Kentucky, and Illinois, Lincoln experienced a rise to historical and cultural prominence unlike few ever seen.  Once a country lawyer and later the crafter of the Gettysburg Address, once a poor farmer’s son and later the President who divided and restored the Union, Abraham Lincoln has left an undeniable historic influence and footprint in our collective culture.  But as much as his position as a champion of individual rights remains the most prominent facet of his position in history, there are a number of qualities and lessons to be taken from Lincoln as an entrepreneurial leader, modeling decision-making and communication strategies that can be effective for entrepreneurs today.

In fact, not only did Lincoln demonstrate a variety of personality and managerial traits that can be modeled by others, but he combined those essential skills and intangibles in a way that allowed him to effectively communicate with and rally the masses behind him, the ultimate goal for anyone introducing a new product, brand, or service into the market.

Lincoln was also just like many of us before he gained legendary status. He was a small business owner of a retail shop. In addition, he is the only President to ever receive a patent for his invention to lift riverboats over sand bars (it was never commercialized).

Perhaps Lincoln’s most admirable and useful quality in the entrepreneurial sense was his ability to make his own decisions in the face of “yes men” and political bigwigs who attempted to influence his actions.  By focusing on a singular goal (ending and abolishing slavery), Lincoln had identified a societal need, as well as the actions needed to see it fixed.  He developed a long-term, widespread strategy for doing so, anticipating the social and political backlash it would engender (especially in the Southern states, but nationally as well) beforehand. 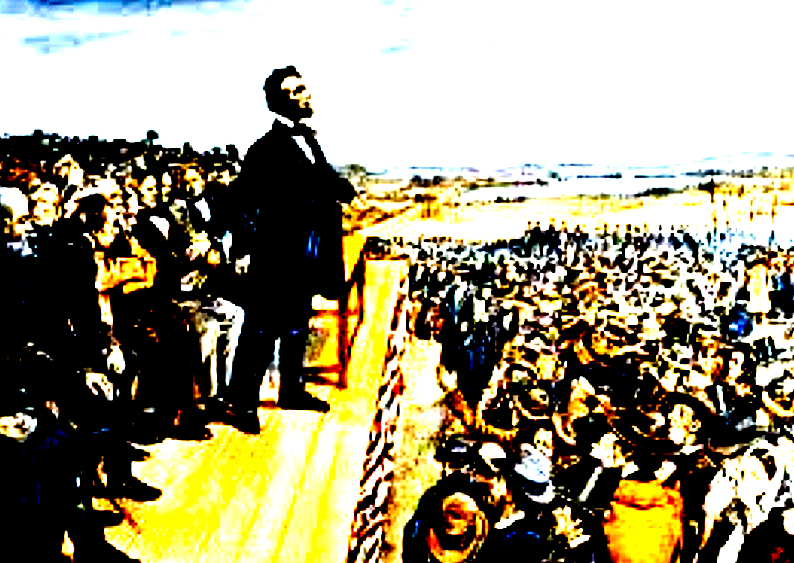 When this quest manifested itself into an enduring and increasingly violent Civil War, Lincoln continued to surround himself with a dedicated brain trust, consisting mostly of advisers who would both challenge and adhere to Lincoln’s leadership. Lincoln found teammates and advisors with opposing viewpoints to help him construct strategies.

For every one of my entrepreneurial ventures, I consult with experts in the field who are more than happy to share their expertise with me given that we have built strong relationships, and I do the same for them whenever I can. These valuable ‘advisors’ are so important to my success because they tell me how it is, even if it isn’t what I want to hear.

Surround Yourself With Different Opinions

Surrounded by characters like intellectually-driven William Seward, the Secretary of State, and Edwin Stanton, the fire-breathing Secretary of Defense, Lincoln and his staff constantly engaged in the type of problem-solving and proactive brainstorming sessions that share similar purpose to those in many small start-ups and companies today.  While the stakes and conditions are nowhere near as extreme as those presided over by Lincoln, the process and results should be recognizable to any hopeful business leader.

The President, during his tenure as the Chief Executive, hired a staff of intelligent and motivated advisors to help shape policy and construct strategies to address needs in society.  He then used them to help clarify and craft his long-term goals and processes to effectively achieve goals (everything from raising, managing, and leading the Army of the Potomac, to managing economic and social costs, to maintaining relations with diplomatic rivals, who could be seen as paralleling business rivals in today’s marketplace).

What else can we learn from President Lincoln the Entrepreneur?  Perseverance.  Despite harsh divisions in Washington D.C. at the time, that mimic the harsh political climate that surrounds entrepreneurs today, President Lincoln used both his own powers, as well as those he could martial through partnerships and deal-making (the bread and butter of entrepreneurship) to not only craft an amendment to abolish slavery, but also build a coalition of support and resources to bring that amendment to fruition in an unforgiving political environment.

On top of that, Lincoln had to remember what any new business owner or creator must remember; How would the markets respond?

Lincoln’s decisions, aside from being far-reaching in the sense of the social and cultural changes they would affect, were also highly influential in the price and availability of U.S. commodities.  Lincoln’s ability to keep competing imperial countries like England, Spain, and France from entering the war was largely predicated on his ability to incentivize American industrial and agricultural exports for those countries (similar to how affiliate marketing works online).  The Confederacy, unable to offer a comparable product outside of tobacco and cotton-based offerings, were not able to compete with the superior offerings being provided by their northern opponent.  While this competition was most evident in the political arena, it remains a clear example of leveraging the free market and embracing competition to ensure long-term success.

While the recent notoriety has continued to emphasize the personality traits that have made Lincoln a pivotal figure in history, it should be no less apparent the entrepreneurial skills he possessed.  Whether it was surrounding himself with smart and challenging talent to better-hone ideas and processes, standing up to “yes men” and boisterous opposition by sticking to long-term and wide-ranging plans, or using economic leverage and simple free-market sense as a means to achieve his goals, Lincoln combined the essential skills of a successful entrepreneur to move the masses behind his positions and proposals.  It is this kind of integrated approach to leadership that remains key to Lincoln’s takeaway lessons for today’s entrepreneurs.

While possessing these aforementioned intangibles alone remains essential to being a successful business leader, the end goal of any entrepreneur is to educate the masses on their product, service, or proposal by explaining why it is a better choice – something Lincoln mastered.  There may be no greater example of effectively communicating a message to the crowds, and then maintaining that message and trust between the leader and his followers, than the life and work of Lincoln as president.