We are living in strange times. Western world central bankers are creating an economy based off debt, which is scary because consumers have demonstrated in decades past a general lack of fiscal responsibility when credit is cheap. What’s more, some countries in the Western world, specifically in Europe, are now under negative interest rate environments – Canada and the United States are dangerously close to doing the same. For average Joe, this means he has to pay the bank to deposit money. In other words, central banks have enticed homeowners and consumers to spend as opposed to save.

This dramatically impacts real estate investors and landlords alike as it can prop up housing prices without wages increasing. This creates more risk in the housing market because the income-to-mortgage ratio increases nationwide. Although it can create a great market to speculate in over the short-term, the long-term ramifications concern me – specifically if inflation hits the economy and central banks are forced to raise rates.

The psychological impact of this low, or negative, interest rate environment is starting to hypnotize even the so-called financial professionals – which is why I’m writing this blog. I have many associates in the investment and retail banking industries. I like to hear how their business is going (transaction volume, financing transactions etc.) and what their company economists are predicting 3 to 6 months out. Usually they have a pretty good barometer on the credit markets, something I’m not tied closely to in my line of work. As a landlord and real estate investor, they can provide good data points as to whether I should be focused on paying down mortgage balances or looking to buy new investment properties. But even they are starting to drink the Kool-Aid and sound a bit crazy. Seems no one is concerned about the ever growing amount of debt in our society…

So here is what the masses are doing in Canada: 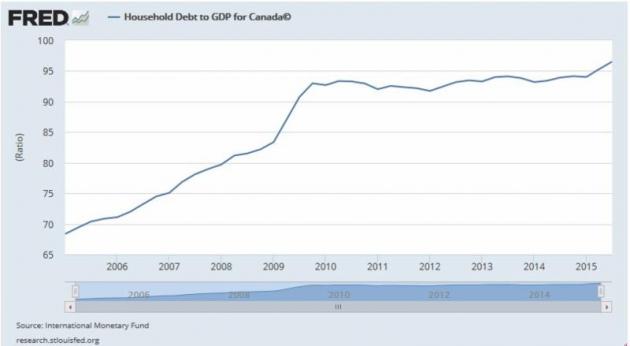 Households are taking on boatloads of debt – historic amounts,  in fact.

In a time when paying down mortgage debt is scoffed at (every landlord seems to be using cheap credit to buy many investment properties), I want to share my take on the current environment. A contrarian stance is always worth considering…

Firstly, most housing markets are currently frothy. They’ve been on a six to seven year run. And in cities such as Vancouver, Hong Kong, London, New York and San Francisco, they’ve been running for more than a decade. Who wants to chase a pump? Not me. So if you’re in a hot housing market, and credit is cheap, don’t take on more leverage just so you can add another property to your portfolio. That’s an ego play.

Course, I understand the benefit of having rental properties that carry large balances – you can write off the interest paid on the property. That’s good, but only to an extent.

Here’s the benefit to paying down your investment properties: it improves your credit (making it easier to get mortgages in tough times so you can buy properties on the cheap) and adds to your net worth. In a down market, if you want to take a swing at a big investment project, and you need the bank’s support to do it, it’s helpful to show a track record of prudent credit management and, most importantly, an asset you can use as collateral (such as a paid off investment property).

The argument against this is ‘why would you pay down the balance when the loan is basically free?’ You’re doing it to prepare for the next down market when liquidity and credit are tight and you want to make a quick play on an asset that in the current market is just too expensive. And when you pay down a mortgage you can get an interest only revolving credit line attached to it (up to 80% of the loan to value), which may allow you to acquire another investment property when builders are desperate for cash offers. A cash offer in a bear market makes you a king. Liquidity matters in tough times.

Think about the value in being liquid during the 2008 housing crisis in a place like Miami or Phoenix, where condos were empty and selling for 40 cents on the dollar…

Although I don’t expect interest rates to rise significantly for a long, long time, I am expecting a credit tightening period in the near future. Given the state of our current credit based economy, that on its own will slow the housing market substantially.

As a landlord, don’t look to acquire properties now if you are in a hot housing market… look to pay down balances and establish credit facilities.

Be ready for the next correction.

P.S. Subscribe to my newsletter below to get weekly entrepreneurial and real estate know-how. Only my best content will land in your inbox.

The Beginning of the End for Gas Cars

How Calgary and Other Oil Towns Can Save Their Economies