American Sniper was a fantastic movie. Clint Eastwood, partnering up with Bradley Cooper, made an epic film about the war in Iraq and its impact on Navy SEAL Chris Kyle. It was gritty, dark at times, and contrary to what many outspoken liberals (like the ignorant Michael Moore) said, it didn’t romanticize war.

Unlike many recently released war movies, American Sniper wasn’t a military film meant to entice its viewers into joining the Army or Marines. It was raw, and very real. It showed just how vicious a toll multiple deployments into battle can have on a man’s life, both professionally and personally. Between The Imitation Game and American Sniper, the two films should clean up this year at the Oscars.

But, as good as the movie American Sniper was, it pales in comparison to the book…

Written by Chris Kyle before he was murdered, and with commentary from his wife throughout, the book American Sniper is the definition of a page-turner. 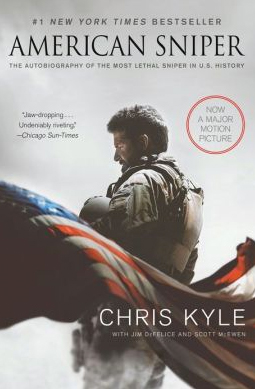 Why the book American Sniper is better than the Movie

A group of ‘insurgents’ were trying to cross a river in order to surprise Marines on the battlefield. They were heavily armed and all done up in body army, ready to ambush Americans. Kyle was on a rooftop overlooking the battle terrain when he spotted the insurgents. He noticed they were contemplating ways to cross the river, but the odds seemed stacked against them given that they did not have a boat. Kyle wrote that they pulled out beach balls and proceeded to use them as floaties to try and cross the river. Numerous insurgents per beach ball…

The insurgents were a long way away from where Kyle was set up, so he came up with a unique strategy.

Kyle also explains the dynamics of the enemy in his book. While the media portrayed the war as a US versus Iraqi rebels, that was far from the actual story. Kyle explains that it was a mosaic of enemies fighting the US and its allies. He said rebels came from Iran, Syria, Tunisia, Iraq and other Middle East nations. And while they all weren’t fighting together, there goal was the same: kill as many Americans as possible in order to take control of the power vacuum.

* Many say Iran was the greatest beneficiary of the Iraq invasion given that Nouri al-Maliki rose to become Prime Minister until 2014. He was viewed as an Iranian puppet.

Kyle also explains how a large contingent of the insurgents were nothing more than drug addicted cowards. He wrote how many of them used drugs to build up enough courage to fight. Nevertheless, he explained, their cowardly instincts almost always took over during firefights. And despite the insurgents claiming it was a holy war of sorts, they didn’t take issue using women or children as shields. They often hid out in Mosques as well, knowing that American troops viewed places of worship as out of bounds.

A really cool component to Kyle’s book was how the updated version provided commentary from his wife. This was a great addition to the book. To show the real time impacts on what Kyle’s multiple deployments to Iraq were having on his family life, his wife provided brutally honest commentary about how she was feeling and her struggles with Chris’ decisions.

On one page Kyle wrote about a specific battle that took place in Iraq (writing with a real time perspective on the fight), and then I flipped the page and his wife had written how she was feeling at that very moment, unaware of what Chris was up to. This was really unique. I’d never read a book that incorporated this type of dual narrative, and it really unveiled the challenges the couple faced because of Chris’ unwavering dedication to his job as a soldier.

I read American Sniper over the holidays and highly encourage you to pick up a copy. If you enjoyed the movie, you will love the book. It’s one of a kind. Click here to grab your copy now.

This Could Be as Big of an Innovation as the Internet

The Story of A Caring Entrepreneur and His Tree-T-Pee