You read No Easy Day and start to ask yourself: man, compared to these guys, what the hell have I done with my life? 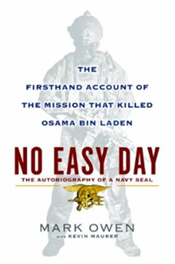 Although controversial, it’s an inspirational book in the sense that it demonstrates what extreme discipline, preparation and passion can do for your career and personal sense of self-worth.

You may think you sacrifice a lot for your career, but you haven’t really done shit compared to the SEALs. In that respect, the book No Easy Day provides a healthy dose of humble pie.

13 Things I Learned After Reading No Easy Day

1. The book’s cover shows it is authored by former SEAL Team 6 member, Mark Owen. That is a fake name to protect his identity. However, thanks to legal action taken against him by the Obama Administration, the author’s real name has now been publicly disclosed: Matt Bissonnette.

2. Despite the book’s subtitle, it is about more than just the raid that killed Bin Laden.

This book gives a detailed account of an elite Navy SEAL member’s life. From his time-starved personal life to the daily training regiments, No Easy Day provides a backstage pass into the SEAL fraternity.

3. Osama Bin Laden was known as UBL (Usama Bin Laden) amongst the intelligence community – that’s the correct spelling of the terrorist’s name.

4. Bin Laden didn’t even put up a fight when the SEALs raided his home in Pakistan. Only his henchmen took up arms and tried to defend the house. Obviously, they were no match for the SEALs.

5. Most members of SEAL Team 6 aren’t fans of Barack Obama. Mark Owen explained that virtually everyone he knew in the squad were not Obama voters. Despite that, they knew that if they were successful in killing Bin Laden, they would be responsible for getting Obama re-elected.

6. SEALs are expected to be ready for deployment within two hours of receiving a phone call from their superiors. No matter what, whether it’s a day off or not, Owen explains that every SEAL is expected to be on a flight and ready to report for duty within two hours. Amazingly, Owen and his SEAL brethren are more than willing. In fact, Owen explains that they can’t wait for the call and often have a hard time focusing in their personal lives when they aren’t at work.

7. The SEALs spent nearly a month preparing for the Bin Laden raid. The CIA had architects construct an identical compound in North Carolina to the one they would be raiding in Pakistan. They had gone through the raid game plan dozens of times, both in the boardroom and at the practice facility. The SEALs even conducted a practice raid in front of government officials in order to get their blessing and have the mission approved.

8. The CIA referred to Osama Bin Laden as ‘the pacer’. He was given that nickname because on drone footage they couldn’t make out for certain if it was Bin Laden in the compound (although they were confident it was him). All they knew for sure was that the man they thought was Bin Laden would pace around the rooftop garden for hours on end without acknowledging anyone. Hence the nickname, ‘the pacer’.

9. Bin Laden had two of his wives at the compound when the SEALs killed him.

10. Although a part of the military, the SEALs often became a hit squad for the CIA after the Iraq war started. This was unique given that the Pentagon and CIA butted heads for power over intelligence and the President’s ear for decades.

11. Owen wrote the book despite it being frowned upon by his SEAL brothers and the military. However, Owen believed it was necessary to write in order to accurately explain the sacrifices SEALs make for their country and the true story of how Bin Laden was killed.

In No Easy Day, Owen explained that unlike any other SEAL mission, there were many inaccurate accounts of what happened after the fact. Even the Obama Administration inaccurately explained what had happened, according to Owen. He figured that if the White House was spilling the beans, despite being inaccurate, he should set the record straight.

I know what you’re thinking: ya right, Owen did it for the money. Nope. He donated most of the proceeds to fellow and former Navy SEALs and their families.

12. After the raid, Obama and Biden met with SEAL Team 6 for the first time, just before the President made a speech to a crowd.

During that brief meeting to thank them for their contribution to the country, Obama took pictures with the SEALs and told the gents that they were welcome at the White House for a beer. The SEALs thought that was pretty cool, but unfortunately Obama didn’t follow up on the offer.

13. After finishing the book, I did some research on the author, and discovered that the Obama Administration has been pursuing legal action against Matt Bissonnette for allegedly not getting clearance from the Pentagon before publishing the book. The legal action has been going on for nearly two years, and apparently there may be a settlement in the works. Apparently the Pentagon wants seize the funds made from the book. That may be a problem, however, given that much of the proceeds from the book were given away.

I found this development quite sad. An American hero, partly responsible for killing America’s most wanted man, is now stuck in a legal battle with his own government…

No Easy Day is a fantastic read. Whether you enjoy reading books about war or not, it provides many valuable lessons for entrepreneurs looking to improve their own discipline and find motivation to excel in whatever field they operate.

Train Your Staff to Wear Many Hats