I just finished reading a fantastic book The Mission, The Men, and Me by Pete Blaber, former Delta Force Commander. For all you 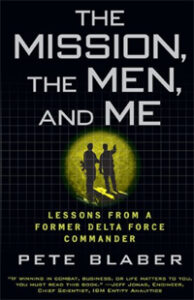 entrepreneurs out there, this is a must read.

Throughout the book, Pete Blaber reveals some of his high-profile missions, which included the early tracking of Osama Bin Laden (referred to in military circles as ‘UBL’), and the extensive preparation that went into them.

Given the relevance in our lives to many of Pete’s missions (he was in Delta Force from the early 90’s to early 2000’s), this book is a fascinating read. But what took it to the next level for me were the lessons on strategy and how to gather high quality intel.

[Tweet ““…no limit to what a man can do or where he can go if he does not mind who gets the credit.””]

Starting with the title, Pete explains its relevance to successfully leading and inspiring a group. As a Delta Force Commander, Pete was expected to provide the strategy and lead elite soldiers into highly dangerous and critical missions for the US government, often tracking the world’s most wanted terrorists. Quite literally, lives rested on Pete’s decisions. He dedicates virtually an entire chapter on how to get the results you need as a leader when facing risky challenges.

Get Everyone Involved in the Planning

Pete explains that if you want others to buy into your mission, and follow your lead, you must be selfless – hence the order of the title The Mission, The Men, and Me.

Pete explains that great leaders put themselves at the bottom of the totem pole… always. He stresses to never ask your men (employees) to do anything you haven’t done yourself, and to establish an organizational culture where no one is bigger than the overall mission (the foundational goal of the organization).

According to Blaber, there are no superstars on any team and most certainly no special treatment for a selected individual. Results are not due to any one individual. If you create that culture, Blaber explains, you can achieve unimaginable things.

It goes back to one of my favorite quotes from Ronald Reagan: “There is no limit to what a man can do or where he can go if he does not mind who gets the credit.”

For example, Pete discusses his search for a Bosnian warlord who had been on the run for years. He had committed heinous acts, which included genocide. Capturing him had proven to be virtually an impossible task for the US Government as the intel into his whereabouts had been lackluster. Millions of dollars had been wasted trying to catch him.

So, after discovering where this warlord may have been hiding, Pete called a meeting with his team to brainstorm a strategy to capture him. This was quite unconventional for military protocol. Pete could have easily kept his subordinates out of the strategy meeting and discussed it with other higher-ups, but he wanted to make sure that everyone gave input toward the mission. After all, it would be their lives on the line.

Blaber explains that when your team is given the opportunity to strategize on important missions, they are vested in the overall result – meaning they have skin in the game. Instead of simply taking orders, they are helping determine their own orders. Long story short, the team came up with an elaborate scheme that involved a Delta Force member dressing up in a gorilla suit! You have to read it…

Blaber goes on to explain the dangers of a bureaucracy, and how to avoid letting your organization turn into one. He talks about critical decisions in American military history that were made in an office in Washington, without any real-time ‘on the ground’ knowledge, often resulting in failure. The consequence of such a culture can be costly and demotivating for your staff.

Blaber explains that so often in a bureaucracy, when a plan has been set in motion, executing the plan becomes the most important thing – even more important than the result! Sounds crazy, but it happens all the time in growing organizations.

Particularly with the military, and for small businesses, situational awareness is more important than almost anything else. Being nimble and willing to evolve as you go is critical to long-term success. In other words, be married to the mission (which has a clear and set objective), not any particular plan.

In one instance in Afghanistan, during the early days of the invasion back in 2002, the Pentagon planned to bomb a compound because it was believed that some of Bin Laden’s cronies would be there in a week’s time. Nevertheless, Pete and his team endeavored to gather ‘on the ground’ intel from some local Afghans and discovered that in fact no Bin Laden loyalists would be at the compound anytime in the near future. On the ground intel explained to Pete that Bin Laden’s crew would likely be hiding about 100 miles away in mountain caves.

Relaying this intel back to the Pentagon, Pete was met with resistance and scoffs at nearly every turn. He wrote that so much time and effort had gone into getting the bombing plan cleared from Washington that the bureaucrats didn’t want to start from scratch, despite intel suggesting they would be wasting tens of millions of dollars on their plan. In this instance, the Pentagon’s plan became more important than the actual mission (which was to kill Bin Laden’s cronies and weaken his support system). Needless to say, the bombing took place and no Taliban were killed…

In another example documenting the importance of garnering high quality intel, Pete explains how the US military wanted to bomb a village believed to be harboring numerous Taliban fighters. But the military was scared to proceed with the aircraft bombing attack because satellite images showed that the village was completely surrounded by anti-aircraft tanks and weaponry. Through his ‘on the ground’ intel, which consisted of interviewing a very knowledgeable Afghan, Pete discovered that the anti-aircraft weaponry was old and decrepit – left behind during the soviet invasion. It didn’t even work! In fact, the Taliban placed this useless equipment around the village as a bluff. And the US had fallen for it. Without real ‘on the ground’ knowledge, the Pentagon was played for a fool.

So often as entrepreneurs we make decisions based on what we think will work, or what we assume people want. And many times we have a good sense. But nonetheless, your first goal when forming strategy should be to gather intel from people ‘on the ground’.

If you are planning on expanding your business into another state or country, don’t assume what works in your region will work there. Consumer behaviors change across various regions, regulations are different all over the world, climate can determine what people buy etc. etc.

Never make assumptions based on your preconceived notions. Get information from people who know… people who are ‘on the ground’. Blaber shares another awesome story on how vital that is when tracking a global terrorist.

I love reading books written by military leaders. They are often filled with a treasure trove of information on how to form strategies particularly useful in business. Better than learning about leadership from a suit or academic who wrote a book, military leaders provide unique insight in their writing on how to execute on the fly. They are abnormally talented in identifying when a plan needs to be changed, and what it takes to get the most out of your staff. I highly recommend picking up a copy of The Mission, The Men, and Me by Pete Blaber. Click here to order your copy.