Back to insights
Overcoming the Entrepreneurial Breaking Point

There’s a highly important, but rarely talked about, facet of entrepreneurship: the entrepreneurial breaking point (EBP).

A paper written by Katerina Gonzalez and Christoph Winkler titled, “The entrepreneurial breaking point: undergoing moments of crisis,” defines the entrepreneurial breaking point (EBP) as “a potentially insurmountable moment of crisis during the new venture formation process, which is critical for decision-making.” The paper notes that EBPs are, in effect, cognitive traps that limit effective decision making — a challenge that some entrepreneurs overcome while others do not.

Gonzalez and Winkler begin the paper with an example of Elon Musk in his early days, writing,

“As the problems mounted, Musk was faced with a conundrum: either invest [his] remaining capital in Tesla received from his sale of PayPal to eBay or let Tesla collapse.”

“This specific ‘breaking point’ required Musk to respond quickly, and his actions avoided Tesla’s demise. Similar to Musk’s experience, reaching a breaking point is a common phenomenon that many entrepreneurs face during their careers.”

The authors go on to discuss other famous entrepreneurs who faced EBPs, namely Steve Jobs and Richard Branson. Interestingly, not only did they have similar problems, but they responded to said problems in a similar way: they adapted their goal structure. In turn, their adaptiveness allowed them to sustain their entrepreneurial activities – and eventually break through to success before exiting. 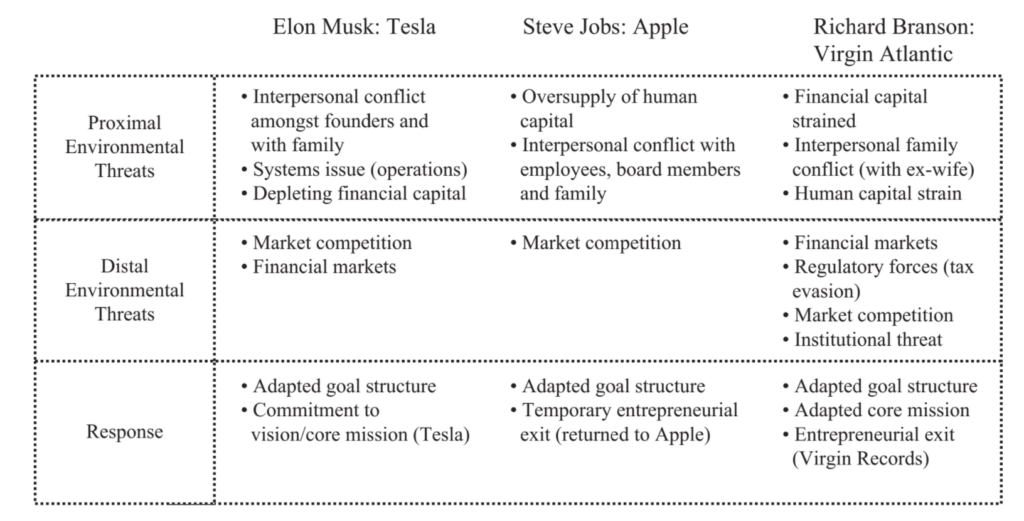 Another powerful example of entrepreneurial breaking points is the story of James Dyson.

“Dyson . . . [spent] 15 years perfecting his design, a process that resulted in 5,127 different prototypes. Those years were tough for the fledgling inventor and his family. ‘By 2,627, my wife and I were really counting our pennies,’ Dyson wrote in 2011. ‘By 3,727, my wife was giving art lessons for some extra cash.’”

Then, after over 5,000 prototypes and fifteen years of hardship, he faced another three years of rejection trying to get his product to market.

Dyson goes on in the aforementioned article,

“I was young and, in hindsight, idealistic, to think that the big vacuum manufacturers would jump at the chance to license my idea,” Dyson told New York. “I had visions of a vacuum revolution. Reality was something different.”

And that in the end,

“I finally understood that if I wanted the technology out there, I’d have to do it myself,” [Dyson] told New York.

In other words, Dyson adapted his goal structure (from licensing with a large-scale vacuum manufacturer to licensing with a small Japanese company), enabling him to overcome a potential breaking point.

Anybody who has paid any attention to vacuums knows there is something special about Dyson. It evokes a subconscious bias of quality engineering and ease of use. Between my office and home, I have 4 Dysons – one for each floor. Not only that, but my wife loves our Dyson vacuum so much that she splurged on a Dyson blow-dryer.

18 years of blood sweat and tears for this entrepreneur led to a universal belief that his product is unmatchable in quality… and they look pretty cool too.

Entrepreneurial Breaking Points Are About Knowing When to Hold or Fold

In the face of a breaking point, there are really only two options available to entrepreneurs: adapting or exiting. It’s important to note that while persevering against adversity is critical to entrepreneurial success – as evidenced by the stories of entrepreneurs like Musk and Dyson – sometimes, exiting is the better long-term strategy. After all, it’s typically better to fold a bad hand than to play it out (but that’s a whole series of articles on its own – something I’ll touch on in the future).