I’m no soccer player, but I love watching the World Cup. To billions of people (3.2 billion to be precise), there is no more magnificent sporting spectacle. The Olympics, Super Bowl or MLB finals don’t come close to the World Cup in respect to viewership and revenue generated. As impressive as the actual sporting event is (and watching the world’s best soccer players represent their countries), what makes the World Cup so remarkable is how it’s marketed. The marketing tactics of FIFA and its World Cup are so refined and targeted that it should be a doctrine for entrepreneurs wanting to build a legacy brand.

The 2018 FIFA World Cup has already provided many lessons for entrepreneurs, both from on-field events and off. I want to share some of them with you today…

5 Valuable Lessons for Entrepreneurs from the 2018 FIFA World Cup

Fear (and respect) the little guy: The upsets in the 2018 World Cup have been monumental for soccer standards. Three of the world’s top five teams are already out of the tournament. The two most recent World Cup winners and the Euro Cup champion are out. Germany, the world’s #1 team and the 2014 World Cup champion, didn’t even qualify to the knockout stage, losing their final game in devastating fashion to the world’s 57th ranked team, South Korea… Argentina, a country with the world’s best player Lionel Messi, barely qualified to the knockout round only to be swiftly beat by France. Spain, the 2010 World Cup champions suffered what has been deemed the worst upset in World Cup knockout round history, losing to Russia, the 70th ranked team in the world, in the round of 16… 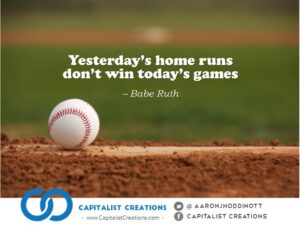 The little guys can, and often do, take out the big dogs, it’s only a matter of time. That’s particularly true in business. The Dow Jones, an index of America’s best thirty publicly traded companies, is a perfect example of this point. Roughly half the companies that were in the Dow twenty years ago are no longer there. Respect your competition, be aware of the newcomers, analyze them and see what they offer that you do not.

A defensive focus makes you mediocre: They say defense wins championships. BS.  The reason for all the upsets in this year’s World Cup is due to a large appetite for risk from the underdog, or an overly cautious strategy by the favourite. South Korea beat the Germans because they played like they had nothing to lose and took substantial defensive risks with their counterattacks. That said, they quite literally did have nothing to lose because when they played Germany, they already had no chance of advancing to the knockout round. However, they took Germany, the world’s #1 ranked team, down with them by being much more attack-focused than they ever have been.

To be a great entrepreneur or sports team, you have to be comfortable taking risks others aren’t, and having an aggressive attack. Allow yourself to be vulnerable. Otherwise, you’ll never know your real capabilities. Playing cautious and looking to edge out your competition 1-0 isn’t enough. The business world is far too competitive for that approach.

Market patriotism and you’ll always win: Look how loyal fans are when they cheer for their country. Brand your company based on its country’s heritage and watch customer affinity increase. Nowhere is this more evident than in the Olympics and the FIFA World Cup.

Keep it real – don’t bullshit and over-embellish (there is no place for sensationalism in sales): Soccer players have a reputation for ‘flopping’ ‘diving’ or feigning injury. In other words, they often embellish when an opposing player makes contact with them, to the point where they have, on numerous occasions, faked injuries in hopes of drawing a penalty. It’s pathetic.

After Rivaldo’s ridiculous flop about a decade ago in World Cup action, soccer fans went to town making fun of this aspect of the game, and it hurt the FIFA brand.

It’s hard for a new fan to want to start following soccer when they see faked injuries – and FIFA suffered a stagnating audience for a while as a result.  To combat the players’ bullshit sales tactics to try and draw penalties, FIFA enacted rules that if a player is caught diving they can be banned from the next game. This rule has helped, but we still see some embellishing today, and it’s a stain on The Beautiful Game’s reputation.

The lesson here, keep sensationalism out of your marketing efforts. Sensationalizing something to make a sale is short-term thinking. Keep it real. That’s attractive and important for the long-term viability of your brand.

Control your product’s supply if you want to build a legacy: Once every four years… that’s it. When the World Cup comes around every fourth year, there is incredible pent-up demand to partake in the games, buy merchandise and watch as much as one can. The World Cup draws crowds and fans like no other event in part due to its scarcity. The last two World Cups have averaged 3.2 billion viewers! That’s nearly half the globe’s population.

Nintendo played this strategy perfectly when they launched the Wii. They limited supply, creating a shortage for the gaming system’s first year of sales. Sony did a similar thing initially with its PS4. There is tremendous value in scarcity. Don’t let your brand become a commodity. Whether you’re a soccer fan or not, the World Cup has a way of enticing the most fair-weather fan to watch as much as they can because it’s a known rarity – once every four years.

Scarcity, sincerity, take risks others won’t and market to patriotism. All valuable reminders from the 2018 FIFA World Cup for entrepreneurs seeking to build a legacy brand. Enjoy the tournament and keep an eye on how the marketers behind the world’s most popular sporting event continue to grow their brand this July.

P.S. Building brands, selling products and services – I’ve been in this game since my early twenties and have learned a thing or two along the way. Subscribe to my free weekly newsletter below to see how I can help your business grow.

How The King of Oil Trading Became a Fugitive